The Battle of the Somme (French: Bataille de la Somme, German: Schlacht an der Somme), also known as the Somme Offensive, was a battle of the First World War fought by the armies of the British and French empires against the German Empire. It took place between 1 July and 18 November 1916 on both sides of the upper reaches of the River Somme in France. The battle was intended to hasten a victory for the Allies and was the largest battle of the First World War on the Western Front.[7] More than 3 million men fought in this battle and one million men were wounded or killed, making it one of the bloodiest battles in human history.[8] 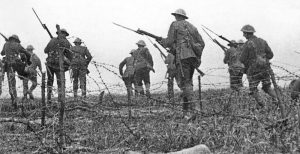 What is Jack Doing?